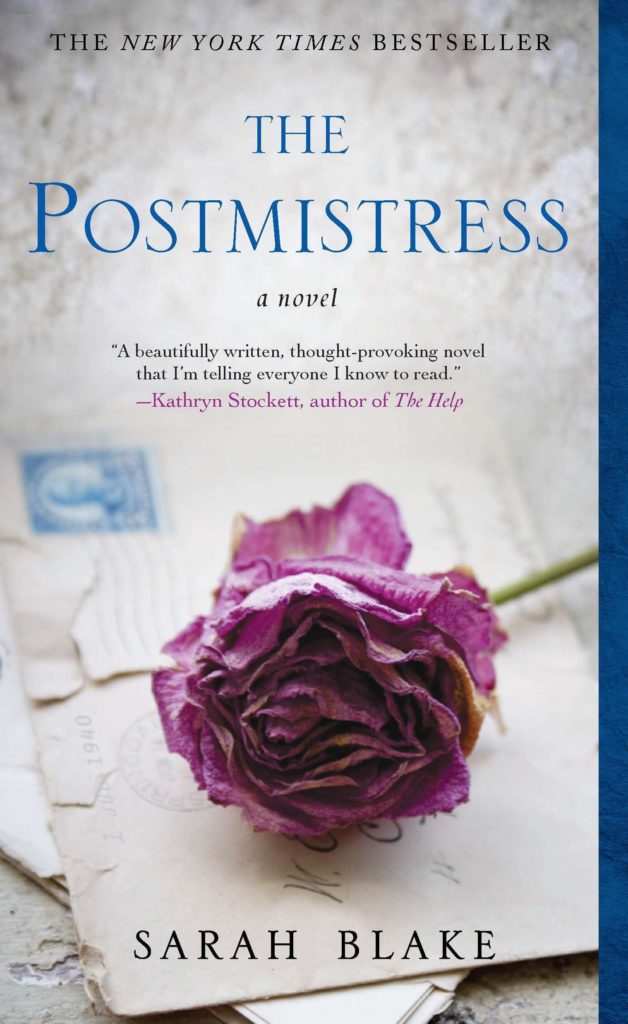 In 1940, Iris James is the postmistress in coastal Franklin, Massachusetts. Iris knows more about the townspeople than she will ever say, and believes her job is to deliver secrets. Yet one day she does the unthinkable: slips a letter into her pocket, reads it, and doesn’t deliver it.

Meanwhile, Frankie Bard broadcasts from overseas with Edward R. Murrow, reporting on the Blitz.  One night in a bomb shelter, she meets a doctor from Cape Cod with a letter in his pocket, a letter Frankie vows to deliver when she returns from Germany and France, where she is recording the stories of war refugees desperately trying to escape.

The residents of Franklin think the war can’t touch them – but as Frankie’s radio broadcasts air, some know that the war is indeed coming. And when Frankie arrives at their doorstep, the two stories collide in a way no one could have foreseen.

The Postmistress is a tale of two worlds-one shattered by violence, the other willfully naïve-and of two women whose job is to deliver the news, yet who find themselves unable to do so. Through their eyes, and the eyes of everyday people caught in history’s tide, it examines how stories are told, and how the fact of war is borne even through everyday life.

“Great books give you a feeling that you miss all day until you finally get to crawl back inside those pages again. The Postmistress is one of those rare books. When I wasn’t reading it, I was thinking about it. Sarah Blake seamlessly moves from inside one character to another, in a novel that reminds us of a time when the news travelled from post to paper to radio and that is how we learned about the world. The Postmistress made me homesick for a time before I was even born.”
–Kathryn Stockett, author of The Help

“…Compassionate, insightful, and unsentimental, this masterful novel is told in a rare and highly successful omniscient voice, one that delves deeply into the seemingly random nature of love and war and story itself. This is a superb book!”
–Andre Dubus III, author of House of Sand and Fog

“The Postmistress is the fictional communique readers have waited for…The romantic, harrowing–and utterly inimitable–story of radio journalist Frankie Bard (appalled yet intoxicated by tragedy as no character I’ve ever read before) contains the uncompromised sensibility found in the writings of Martha Gellhorn. The Postmistress belongs in what Gellhorn called “the permanent and necessary” library.”
–Howard Norman, author of The Bird Artist and Devotion

“… Blake raises unsettling questions about the randomness of violence and death, and the simultaneity of experience–how can people frolic on a beach while others are being murdered? Matching harrowing action with reflection, romance with pathos, Blake’s emotional saga of conscience and genocide is poised to become a best-seller of the highest echelon.”
–Donna Seaman, ALA Booklist, Starred review

“Even readers who don’t think they like historical novels will love this one and talk it up to their friends. Highly recommended for all fans of beautifully wrought fiction.”
–Library Journal, Starred Review

“The real strength of The Postmistress lies in its ability to strip away readers’ defenses against stories of wartime uncertainty and infuse that chaos with wrenching immediacy and terror. Ms. Blake writes powerfully about the fragility of life…how a person can be present in one instant and then in the next, gone forever…”

“An ambitious novel that turns on the ironies of war and the cost of meddling with fate….”